Recently, the signing ceremony of “international cooperation project of high-level cultivation of industrial talent” organized by our company was successfully held in Chongqing, a beautiful mountain city of China.  The signing ceremony, with the signing online between Nagasaki Institute of Applied Science（Nagasaki， Japan） and QianJiang Vocational Education Center（Chongqing， China），and the signing offline between our company and QianJiang Vocational Education Center（Chongqing， China）, brought up a new feature of international cooperation in the post-epidemic era.

The day before yesterday afternoon, our chairman Xiaoqin Wang arrived at Qianjiang, Chongqing from Shanghai, and welcomed Nobuyuki Watanabe, the consul-general of the Consulate-General of Japan, Chongqing, and the vice-consul Akie Kawabata as well. In the same day, relevant leaders of the district committee and government in Qianjiang attended the symposium and the welcome party, organized by the deputy head of the Qianjiang District Committee and District Government. At the meantime, we also invited Hideki Nishioka, the Vice President of China Business Center of JMAC (Japan Management Association Consultants),  Kazuhito Matsuda, the General-Manager of Tohshin-NSK Rollers (Suzhou) CO., LTD and so on. 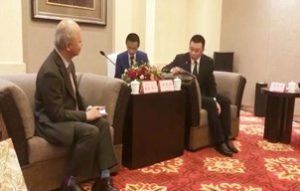 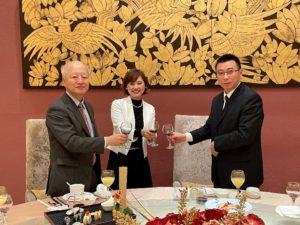 The next day, at 9 AM, the signing ceremony was officially held in a five-star hotel in Qianjiang District, Chongqing. Nobuyuki Watanabe, consul-general in Chongqing, Renwen Mi, secretary of the working committee & education committee in Qianjiang District, and Xiaoqin Wang, the chairman of our company, were invited to attend the signing ceremony and delivered a speech. Also, over 150 guests participated in this ceremony, including leaders of Foreign Affairs Office in Chongqing, representatives of Japanese companies, almost every principal of vocational schools and high schools in South-East Chongqing, and representatives of parents and students who signed up for the project. 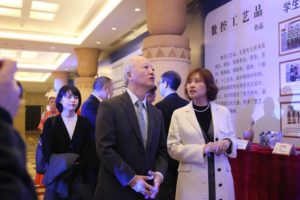 Figure2   Wang introduced the traditional culture to the consul-general 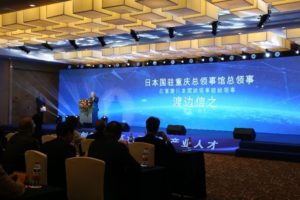 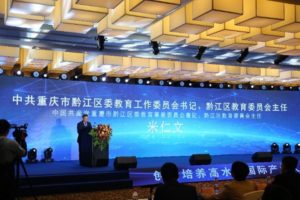 In Wang’s speech, she said: “I sincerely thank all the guests from both China and Japan for coming. We will actively uphold the country’s policy that our education should be opening up to the outside world. Beside that, we should also focus on the overall goal of the ‘14th Five-Year’”. According to her speech, as a bench-marking enterprise in South-East Chongqing, we must build a bridge for the friendship of China & Japan. We must assemble a platform for the exchange of talents and education between China and Japan, by which we could connect domestic and foreign educational resources. We must provide teachers and students the best service for developing international education, such as language learning, studying abroad, mutual visiting, academic exchange and school-enterprise cooperation. We must also establish a Sino-Japanese talent and industry exchange platform, with which the service systems such as overseas & foreign employment would come true. Finally, we must connect to Qianjiang District for the international economic trading, and cultural exchange. In order to promote the internationalization of various industries in Qianjiang District. 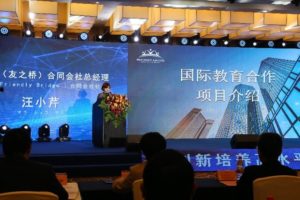 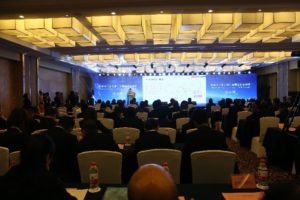 After the speech, the relevant parties signed the cooperation agreements online or offline. With that, it has opened a new chapter of foreign cooperation in this region. 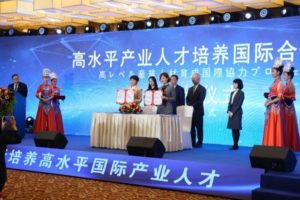 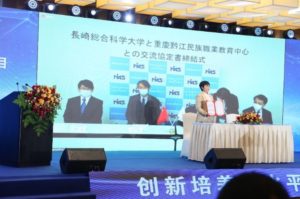 Figure7   The Highlight of Our Company

How do you get a job after graduating?

We have taught employment after graduation by making full use of over 10 years experience and personal connections in Ja...

Why do you recommend using FB? Applicant It seems that many study abroad mediators decide on a school or m...

Don’t worry about your accommodation and life.

Dormitory / life after coming to Japan Rental in Japan is a high hurdle for international students. First of all, forei...
How do you get a job after graduating?
Home
Uncategorized

The Signing Ceremony “International Cooperation Project of High-Level Cultivation of Industrial Talent” Successfully Concluded
How do you get a job after graduating?
Don’t worry about your accommodation and life.
Reasons to recommend using FB